CBSS STAFF PICKED AN ASTRONOMICAL OBJECTS (SUSPECTED TO BE METEORITE) WHICH LANDED AT TSE-ATOV KENDEV AND TSE-FEDAH, BENUE STATE

It will be recalled that on Monday 17th of May, 2010 around 12:00 pm three scientific officers team comprising Okere B. I., Najib Yusuf and Engr. Nasiru Aliyu were directed to go to Makurdi, Benue State to retrieve an object which landed in a village in Benue State and also to take scientific observations at the site of landing. The three men team left at around 2:00 pm and arrived at Makurdi by 5:30 pm. In the early hour of Tuesday 18th of May, 2010 the three man team from Centre for Basic Space Science (CBSS) met with their counterparts from National Space Research and Development Agency (NASRDA) and Centre for Geodesy and Geodynamics Toro and also the Honourable Commissioner of Benue State Ministry of Science and Technology representing the Benue state government. The journey of 200Km took off  from Makurdi through Buruku to the River side, on crossing the river with the four vehicles, all on speed canoes/Boat,  the journey continues to the landed site in the villages namely Tse-Atov and Tse-Fedah in Zaki-Biam Ukum local government area of Benue state.
At the site we gathered that the incident occurred on Saturday 8th may, 2010 at around 3:30pm, object A (The big one) landed in a farm about 100m away to a seven huts compound. And object B landed also in a farm at about 2km distance from the first landing site. 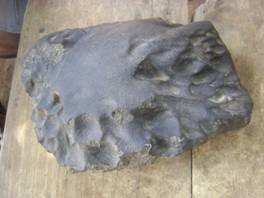 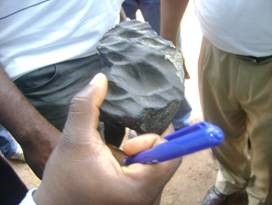 EXCITING ANNOUNCEMENT TO ALL SPACE SCIENTISTS

Nigerian Journal of Space Research (NJSR) is a journal published with the aim of serving as a medium or channel for dissemination of the work, findings and discoveries of researchers in Nigeria and other parts of the world in various areas of space science. Currently such an important publication is non-existent in Nigeria. Scientists/researchers themselves, during the workshop organized by CBSS in July 2004, identified the urgent need of having this journal. The journal shall include original papers, editorials, news, conferences and career/professional information that would be relevant to space scientists/researchers in Nigeria.